Agrigento It offers to visitors an enchanting landscape scenario where you can find itineraries ranging from the beauty and variety of the landscapes to the mild climate, the blue of the sky and the sea, in addition to the wealth of archaeological Heritage and the prints of the different civilizations settled in Sicily in three thousand years of history. To visit the Valley of the Temples where you can admire the superb ruins of the Temple of Olympian Zeus, one of the greatest of ancient Greek , and the Temple of Castor and Pollux, became the symbol of Agrigento. Going forward we find the Temple of Hercules, the oldest of the Akragas temples and then the Temple of Concordia, the best preserved of all Greek temples and one of the most perfect creations of  Doric architecture, built in the fifth century BC later converted into a Catholic church dedicated to St. George in the sixth century A.D., and finally the Temple of Juno on the top of a hill, majestic and solitary, the most fascinating and mysterious of all. It’s a must for all visitors to tour the current city where we can find fine examples of buildings such as the Abbey of the Holy Spirit of the thirteenth century, with the adjoining former monastery, surely one of the most beautiful of Sicily, that preserves the cloister with Gothic portals , the Chapter House with a magnificent portal and the ancient refectory also with gothic arches. Interesting is to visit the Dome of the ‘eleventh century, later rebuilt, which has a simple facade and a massive fourteenth-century bell tower and also retains a “treasure” with some valuable pieces of gold and the “Diocesan Museum” which contains the very famous sarcophagus of Phaedra, sublime Roman sculptural work of the II-III century. Do not miss the Archaeological Museum where you can see fine examples of sculptures, vases, sarcophagi, pottery and other objects from the Valley of the Temples archaeological excavations and other dell’agrigentino archaeological sites, among which stands out for its beauty the marble statue the so-called Efebo of Agrigento.

Sciacca Dominated by the large square of the hotspring  overlooking towards Africa, not far from the temples of Selinunte and Agrigento and Eraclea Minoa theater. Sciacca was also the natural set of well-known films such as “In the name of the law” and “Seduced and Abandoned”: Fellini was in love with it, and suggested to director Pietro Germi to use it as a location for its movies. The sailors corners, those crafts and those sacred of this charming town remained stucked in the eyes of all Italians. The origins of Sciacca are ancient, probably during the Sicani or the Phoenicians. In VII. C., according to Thucydides, the inhabitants of Selinunte had built, as the boundary of their territory, a castle that was named Terme Selinuntine. The first evidence that the territory of Sciacca was inhabited in prehistoric times are validated by the finds of human skeletons and a few carved stones, which were probably used for sitting or sleeping. Some graphic signs, more visible in the period Fazello lived, were almost forgotten, but recent studies have confirmed its existence. These important remote civilizations signals were found in the Cave stove, on the summit of Mount Cronio, today Mount St. Calogero, since ancient times, man found in this mountain the relief that flowed from its source . According to legend, the hot spring (the so-called San Calogero stoves) Mount Cronio would be implanted by Daedalus about a thousand years before the Christian era. The pottery found in the caves of Mount Cronio, dating from the transition period between the Stone Age and the Bronze Age, The Saccensi, so the inhabitants of Sciacca are called, they believe that the ancient city was located in the valley formed by the Monte Nadore and Mount San Calogero, about six kilometers from today’s town. In this place they came to light remains of large foundations. This would confirm the existence of the ancient city inhabited by Sican populations. The Phoenician inscriptions, however, they would confirm the move.

Eraclea e Minoa A rugged landscape almost desert if it were not for the sea lapping at the sand dunes. And ‘the scenario of Eraclea and Minoa, an ancient Mycenaean colonial settlement in the province of Agrigento. The archaeological remains of this civilization are built on a promontory that slopes down to the sea, near Capo Bianco. A beautiful and long beach is bordered by high white wall of the head and to the southeast, by a wide pine forest. The charm of the story that binds to the scenic beauty creating a unique and enchanted atmosphere.  The city of Minoa was most probably built in the sixth century a.c. by the Greeks of nearby Selinunte. The name Eraclea was later added in honor of Heracles. In the third century a.c.. the city passed into the hands of the Romans and became the scene of several wars and gradually abandoned. Over time Eraclea Minoa influenced with its charm all its visitors thanks to its white sandy beach, which extends to the right of a large pine forest, to the ancient city that remains there as a bulwark of history. 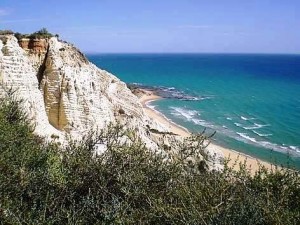 Oasis Tower Salsa Located in the municipality of Siculiana (AG) between Siculiana Marina and Eraclea Minoa, within a Site of Community Importance. Chalk cliffs of Torre Salsa alternate with calcareous marl Globigerina, sometimes covered by layers of clay. Rich herbaceous vegetation and shrubs. Inside extends a wetland. The ancient watchtower is on the top of a small promontory. Even in winter, walkers may find that trekking to Torre Salsa, following the well-equipped nature trail that winds through the reserve managed by the WWF in the western part of the province of Agrigento, is an experience not to be missed. In the wild and unspoiled area that stretches between the beaches of the tourist village of Siculiana Marina and the ruins of the Hellenistic settlement of Eraclea Minoa, the protected area - open to the public 365 days a year - it offers a magical landscape of cliffs gypsum, limestone marl, lonely beaches, marshes and transparent waters.