Messina Wedged between the Tyrrhenian and the Ionian Sea, has a natural position, with landscapes of the most varied and interesting with its endless sandy beaches, cliffs overlooking the sea and vast woodlands. of indisputable beauty monuments remained as testimony to a story, or rather a thousand stories. Founded by Greek colonists, the city was very important for its port, the hub of exchanges between the Tyrrhenian Sea and the Ionian Sea, which made Messina a big shopping center. The face of the city has been profoundly changed by the disastrous earthquake that struck in 1908 and today are not well visible architectural components of its historical past. To visit the Cathedral which is the most important monument of the city, built by the Normans in 1197 is dedicated to St. Mary. Already in 1254 a fire destroyed part of the ceiling, in 1693 the earthquake ruined, in 1783 an earthquake destroyed the bell tower and in 1908 the earthquake destroyed it almost entirely. To the left of the cathedral, slightly aloof, it stands the bell tower that contains within it the biggest clock in the world built in 1933 by the watchmaker Ungerer in Strasbourg. Of great importance is the Regional Museum, founded in 1914, which houses all the works of religious buildings, sculptures, decorations and architectural elements which could recover after the 1908 earthquake.

Taormina For its beautiful location, the city is the island’s main tourist center, popular since the mid-1800s by the aristocracy throughout Europe. It boasts excellent accommodation facilities and tourism-related activities. Fine embroidery, wrought iron and carved wood and antiques. One of the most important events held in Taormina every summer is the show “Taormina Arte”, a film festival, theater and ballet that brings together in the magnificent setting of the Greek Theater major international exponents of these arts. The visit begins by crossing Porta Messina Taormina, following the Corso Umberto I and coming soon to the Piazza Vittorio Emanuele II with the Palazzo Corvaja, a building made up of several successive mergers with a center of Arab origin body, another Norman and another with Aragon beautiful three-light and mullioned windows that face the square. Piazza Vittorio Emanuele II branches off a road leading to the Greek Theatre, the most famous monument of Taormina for its unique charm and the beautiful view of the coastline of Naxos, with the imposing outline of Etna in the background. Along Corso Umberto I I can see the magnificent views offered by medieval streets and meet the order the Belvedere, the small Church of St. Augustine, the Church of St. Joseph, the Clock Tower, the Porta di Mezzo and Piazza del Duomo with the Cathedral Basilica of St. Nicholas of the thirteenth century, rebuilt in the fifteenth and sixteenth centuries and remodeled again in ‘700. The Basilica has a seventeenth-century portal, lancet windows of the fifteenth century, a false battlements crowning the building and an interior like a basilica with three naves, with numerous paintings fifteenth. The Palace of the Dukes of S. Stefano is located below and the path ends with the Porta Catania.

Tindari The town has ancient origins, in fact, was founded in 396. C. by Dionysius of Syracuse. Tindari was initially a colony of mercenaries who had taken part in the war against Carthage and took the name of Tyndaris in honor of Tyndareus, king of Sparta. In the archaeological area are the remains of the ancient city. The first excavations were carried out in the year 1838-1839 before being resumed in 1960 and to follow. Among the Tindari soils they were found mosaics, sculptures and ceramics that are now preserved in part in the Archaeological Museum of Palermo and partly in the local museum. Besides the archaeological remains and the areas that the time has preserved not to be missed, once at Tindari, it is the Shrine of the Black Madonna. The sanctuary is located on a promontory overlooking the sea, at the ancient Acropolis. Besides this beautiful church Another very charming place is the Lagoon Tindari you on route 113, along the Tyrrhenian coast. A truly breathtaking scenery and, for lovers of the sea, very unique. Another very charming town is the beach of Marinello. In addition to talking about if for its beauty, this beach are tied various legends. Between myth, art, culture and history unfolds the beauty of Tindari admired since the time of Cicero up to Camilleri. Camilleri has chosen the city of Tindari for one of the stories of his most famous novel, the Commissioner Montalbano. 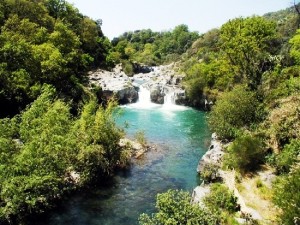 Nebrodi Park Immense park that encloses the largest forest area in all of Sicily (about 85,000 hectares), Nebrodi constitute a real Apennine emerged along the Tyrrhenian coast. Multiple pools of water dotting the lush green setting by creating, in the illusory game of glare and reflections, virtual images that dilate endlessly giving the landscape an unreal magic. The park's charm lies in the beauty and variety of landscapes. By the scenic hills of Monte Soro (1847 meters) it goes to the beautiful shores of S. Agata di Militello and Caronia Marina. primordial oasis of Sicily a forested time, the park still keeps this archaic quality in its forests of beech, true relics of the ice ages that these high altitudes are still in fresh and deep soils, the most welcoming habitat to reproduce and perpetuate itself. The wet weather and cold, in fact, favors a rapid reconstruction of forests. The woods Mangalaviti, Scavioli, Caronia, Mistretta, Malabotta and the Old Forest, all of natural origin, are the places where the myth has it that Daphne, God of bucolic poetry, would lead their herds descended from the same stock of the Sun herds. these mountains, once populated by deer (Nebros, in greek, means deer) deer, fallow deer, wild boars, bears, wolves, lynx, vultures and owls, are runs today from wild herds of pigs blacks, renowned for their delicacy meat. At average odds meet sanfratellani populous herds of horses that often Biviere cooling off in the water. In the lake areas of the park, such as the lake of Cesaro or Treane, it is not difficult to find marsh turtles, coots, mallards and moorhens. Near the steep cliffs it is easy to meet various specimens of birds of prey: the golden eagle, Bonelli's eagle, peregrine falcon and Lanner. In these areas, until the '60s, the park was home to the last colony of Sicilian griffons now completely disappeared from the island. In this alternation of lakes, rocky areas and dense forests it does not lack the human presence. Even today the people live and work in this area: shepherds, farmers, charcoal and cork binders testify an ancient and traditional world that has disappeared elsewhere. The economy is tied to local products prepared handcrafted by shepherds. Beyond the natural beauty, the Nebrodi Park embraces the provinces of Messina, Catania and Enna, places rich in traditions and architectural interest: churches, monasteries, ancient buildings and constructions of medieval alleys. Among the traditional festivals, the most characteristic is the "Muzzune" of Alcara Li Fusi in the province of Messina, during this ancient festival (June 24) on the streets of the village imbandiscono tables decorated with precious blankets on which are placed the "Muzzuni" jars and jugs with broken neck in which they sprout wheat and barley. All seasons offer opportunities for excursions, but spring always remains the richest of colors and blooms period.

Resort: Set in a dream garden, good food and enjoyable entertainment are just some of the More info
Book now