Catania Inside the city of Catania you can discover the secrets and hidden wonders of places magically sculpted over time. Culture, origins, traditions and history of a city with a magical atmosphere where folklore sees the most truthful expression in the feast of St. Agatha and its historical markets. Of crucial importance is a visit to the cathedral square, surrounded by baroque palaces, the center of the square stands the Elephant Fountain, a very special monument and symbol of the city, consisting of a lava elephant holding an Egyptian obelisk. On the north side of the square stands the magnificent Town Hall and opposite the Palace of the former Seminary of the Clerics. On the east side stands the majestic architecture of the Cathedral, in the nearby of the splendid Palazzo Biscari, a magnificent example of baroque Catania and the great eighteenth-century Benedictine Monastery of St. Nicholas Arena, originally built in 1558, rebuilt after the 1693 earthquake and even expanded on most grandiose facility in 1703. the Castello Ursino, built by Frederick II of Swabia, now houses the Museo Civico. Important the spectacular via Etnea, Catania’s historic drawing room, and the Via dei Crociferi with its superb churches including that of St. Benedict and St. Giuliano. Among the testimonies of classical times we find the Greek Theatre and the Roman Amphitheatre. A rich program of opera and symphonic is held in the beautiful Teatro Massimo.

Acireale The city of “hundred bell towers”, home of the flowered baroque, the spa town, home to ancient religious and folk. Undisputed “queen” of the Sicilian Carnival preserves the best traditions, such as the Opera dei Pupi or the typical pastry. Near the city of Catania, between the volcano and the Ionian coast, it founded on lava stone making up most of the streets and buildings of the eighteenth century. Of ancient origin, its foundation goes back even to the legendary Cyclops. The 1693 earthquake destroyed it but was rebuilt with its baroque aspect has many valuable buildings and monuments contained mainly in the Piazza del Duomo. Just the Duomo is an admirable architecture of the baroque period with a facade in Romanesque-Gothic style, the Latin cross decorated with precious frescoes and antique paintings. In Piazza del Duomo is the seventeenth-century Basilica of Saints Peter and Paul church tower with a spire. The square is closed on the south side by the magnificent Town Hall, with rusticated façade typically seventeenth-century and superb shelves carved with typical exuberance of the flowered baroque Catania, near the Basilica of St. Sebastian, patron of the city, with sumptuous Baroque façade preceded by a balustrade crowned by ten statues. The feast of the patron saint, St. Sebastian, is celebrated on January 20. The statue of the saint is carried in procession on a silver fercolo driven by devotees belonging to various brotherhoods. Interestingly Folklore Theatre which houses the Opera performances Puppet and its Carnival, the most beautiful of Sicily, and perhaps among the most beautiful in Italy.

Caltagirone pottery town of Baroque aristocratic profile, is famous for its ceramics. The historical center, as well as numerous historical monuments and churches, houses more than one hundred workshops arranged between the square in the heart of the old village and its main streets. Renowned worldwide for the production of ceramics that can be seen in various parts of the city, such as in the Villa, the public garden adorned with glittering tiles, and in front of the terrace is also decorated with colorful ceramics, standing next to a beautiful palace in steps and balustrades all covered with majolica reliefs which houses the State Museum of Ceramics, interesting exhibition that illustrates the history of the Sicilian ceramics from prehistoric times to today. A visit is a must to the Cathedral, building of the Norman period but rebuilt several times, the long building of the Court Capitaniale, with a parade of ornate doorways and windows, so the Town Hall Square and at the bottom of it a long flight of steps, called the “scale”, on top of which stands the eighteenth-century church of Santa Maria del Monte, where he venerated the image of the Madonna Conadomini. The dramatic staircase lined with polychrome majolica tiles, made by local potters, sums up the spirit of Caltagirone and joins the upper town to the lower town and was built in 1608 by architect Giuseppe Giacalone. 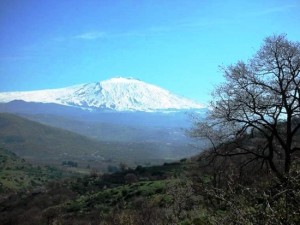 natural park of Etna The highest active volcano in Europe with its more than 3000 meters high and one of the largest in the world. Subaerial volcanic eruptions covered the submarine eruptions, started about 600,000 years ago, so today you can see part of the activity in ancient outcrops of Pleistocene clays also 700 meters. In this variegated universe that is Etna in its sloping slopes down to the sea, they are placed forests, parks, orchards, vineyards, villages and towns. It is an integral part of the human environment, and this is demonstrated by the presence of Catania at its base and of all the other countries rooted on its slopes. All human settlements bear the hallmark of the volcano: palaces and churches show blacks lava stone ornaments, the roads are often paved by flagstones of compact lava that draws long black stripes. They are present on the volcano and true works of art of nature such as the superb, unique and gigantic One Hundred Horses Chestnut. It is a chestnut tree from the age of between 3,600 and 4,000 years that still can be seen in the vicinity of the town of S. Alfio. Legend has it that Queen Giovanna D'Aragona, escorted by a retinue of one hundred knights, pass by these wooded lands when a sudden storm did not allow more than continue; The giant chestnut tree was then able to give shelter to the queen and to all. Etna is first of all a volcano, the highest in Europe showing performances of extraordinary intensity when it comes into terrifying activities erupting lava flows. The Etna is a reality that exists since 1987, was born with the primary purpose to defend and preserve the flora and fauna and the activity connected to the manifestations of volcanic origin. The park shows this environment unique in its kind made of lava deserts and lush forests where the excesses of the volcano always shape new scenarios. One of the most beautiful points of Etna is the Bove valley where you can admire the wide view of the lava materials screened by the eruptions: from harsh basaltic lavas and thin with black ashes. A manifestation of the most amazing volcano is to remove development of cavity formation due to different compositions of magma, presence of gas and air temperatures, some of which are truly spectacular, as the Ice Cave, so named because it is an inexhaustible ice supply arranged in the most varied forms. We also remember the Cave of the Raspberries, a gallery of remarkable traveled by air currents and sharp contours and taglienti.Per those who love strong emotions is a must the ascent to the summit craters, unforgettable experience that you can only do with the ' help of expert guides Etna. The park offers a great deal for those who love botany, in fact, after the bands of endemic crops, around 1300 meters meet the woods of oak and downy oak which in autumn are tinged with yellow, red and brown and often found near the ancient chestnut trees. Climbing at high altitude you can admire the large pine forests where it grows on larch pine present only on Etna, especially in the pine forest of Linguaglossa. A curiosity that often observe during the visit of the Park is the presence of "dagale", small green islands entirely surrounded by lava spared the destruction wrought by the volcano. Higher up is the beech tree by beautiful foliage, depending on the area, or take a shrub or a tall, leafy stem. An unexpected show is that given by the Birch etnense, only present in this site and the remaining periods of the Ice Age, shows a more slender structure compared to its Scandinavian relatives or Siberian. A very characteristic tree species that can be found in most latitudes is the etnense broom. During the months of April and May it covers much of the territory of the park with its bright yellow flowering. The Etna area is full of large amounts of edible fungi, especially those of the genus boletus, commonly called mushrooms. Above 2000 meters lies the desert area where the lava is the crucial component of the territory, you notice sparse juniper bushes by the dwarf habit and, higher up, where no plant can survive, cling to the ground a few pioneer plants as groundsel Etna, the thistle and chickweed Etna saint whose roots begin the slow work of erosion of the soil. The Etna Park has a fairly diverse wildlife that you can find out, with a little 'luck, engaging in healthy trekking through the woods. There are wild rabbits, weasels, foxes, porcupines, hedgehogs, dormice, martens and wild cats. There are many species of birds, among which the rare Sicilian Rock Partridge, a fowl from blue-gray feathers with its beak and red legs, jays of the forest, and the lapwing, the redstart, the red woodpecker, the buzzard, the raven, the blackbird, the nightingale, the magpie and even the golden eagle that has returned to nest in the most inaccessible places in the park.

Catania
Time 8 days 7 nights in a 3 star hotel. Treatment half board with drink included. Departure  from More info
Book now

Catania
Tour of Eastern Sicily Parks with mixed routes (road and off-road) through Etna, Nebrodi and Pelorit More info
Book now
x
x
This website uses cookies to improve your experience. We'll assume you're ok with this, but you can opt-out if you wish.Accept Read More
Privacy & Cookies Policy
Necessary Always Enabled